I have loved the voxel-based video game for well over 10 years, it is one of the very few popular video games which could run on Linux at that time, this was before Proton was even a thought. This lead me down a long garden path as I grew up and realised I was really into computers, how they work and how I can convince them to do my bidding through code.

Since 2017 I have been writing plugins for Minecraft Servers after HPE Cloud gave us a monthly budget for hosting a Minecraft server for our local Coderdojo in Leixlip, Ireland. This is what taught me the importance of system administration, how to manage what was ostensibly a VPS in the cloud as a 14⁄15-year-old. It was a fun form of Freedom, as I was the only kid with sufficient familiarity with Linux to be able to do it. 1

In wanting to improve the server, I learned that you could write your own modifications for the server using something known as CraftBukkit. This is what introduced me to the Java Programming Language, which I now use on a daily basis – both in College and in my work as a programming teacher for Olus Education 2

I remember writing my first Java programs using Netbeans3, where I’m pretty sure every second word that came out of my fingers was static. I’m glad that my inner linguist had me writing (relatively) easy to translate code. 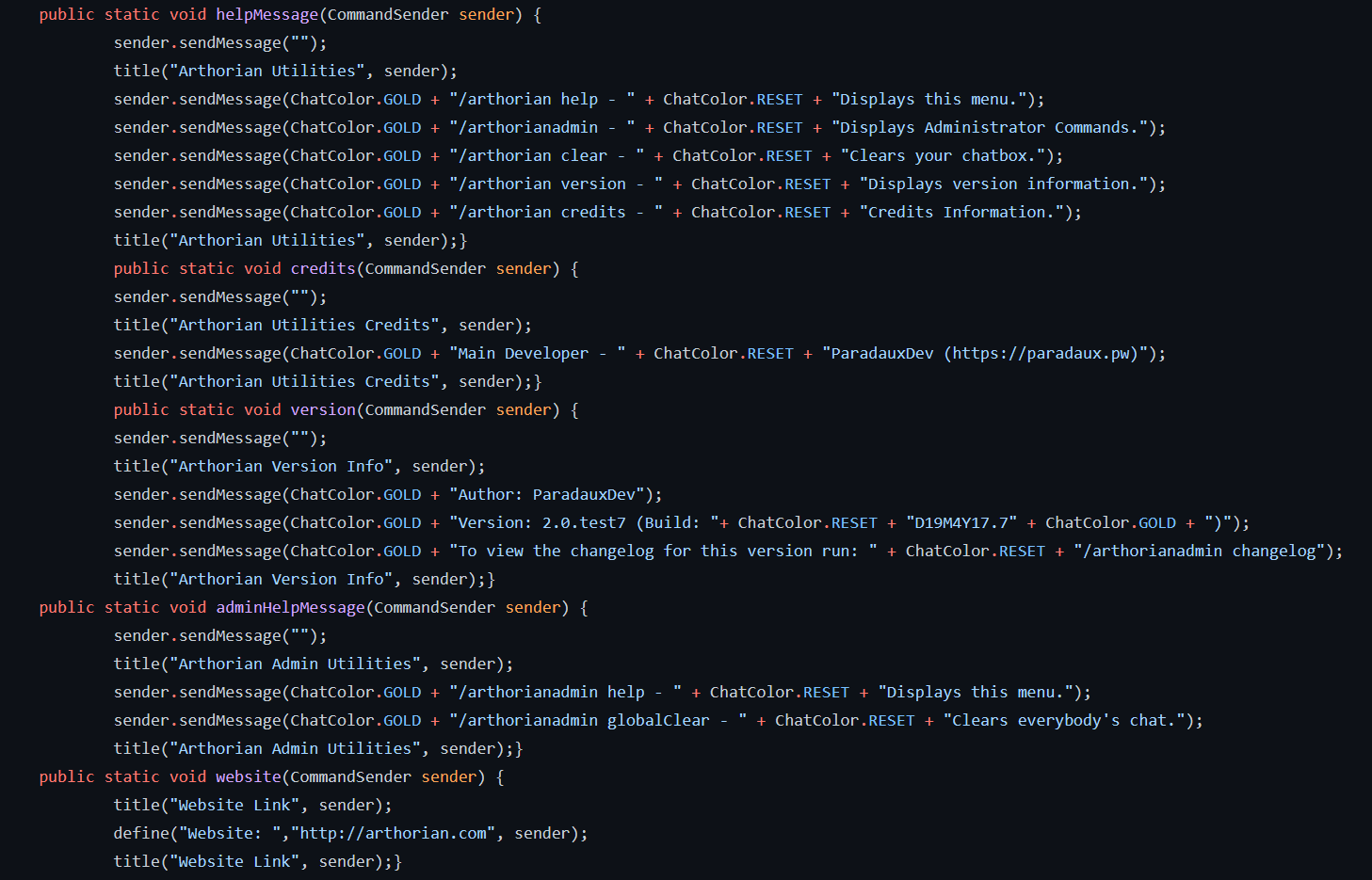 A pretty laughable attempt, but I had the right idea! You can see the rife static abuse, and weirdly inconsistent indentation.

In 2019 I started getting involved with a community of developers who were doing Minecraft server development, stemming from a subreddit r/admincraft 4 and I managed to pick up some loose contract work, I was working as a Kitchen Porter that same summer so I was very appreciative of earning ~€4/hr doing what I loved over the €10/hr for which I was doing some of the most physically intense labor of my life to date.

I wrote some publicly available modifications for Minecraft servers, simple ones – a discord to Minecraft bridge and scheduled announcement system which gained me enough notoriety to pick up a position at a larger organisation running Minecraft Servers; DestinyMc.

It was this that actually technically challenged me enough to learn Java formally, and quickly at that. I was thrown in as the sole maintainer of a codebase spanning 4 years and with over 1.4m source lines of code, according to the Statistic Plugin for Intellij. I was working on a (legally questionable) clone of Pokémon within Minecraft without the use of client-side mods, so anyone with a computer and no technical knowledge could join and play – It requested no effort from the end-user. I am extremely proud of the work I did for them, even though most of my time was spent refactoring and refining the existing codebase. This also required decompiling and reverse-engineering substantial amounts of the (obfuscated) Minecraft server source code, as there were many unacceptable tradeoffs or simply non-existing API implementations within Bukkit and it’s spiritual successor, Paper.

I left that role at the end of July 2021 with 230,000 lines of code (total changes, not necessarily all additions) under my belt in a programming language I barely knew walking into it. I am indebted for the experience, and I loved working with everyone I did on it!

Today I made the decision to leave the Minecraft development scene, after months of Hiatus. While I’m grateful for everything the community and the experience has given me, it’s time that I move on, as I complete my degree and work on other consultancy and pedagogical projects which I have in the works. If you would be interested in taking over conch, AutoBroadcast or any of my other spigot projects, please do let me know.

This is more of an abriged version, I left out a lot of details for the sake of brevity, and besides that’s content for future dissections, including the debugging of so many concurrency issues.

entire shadow industry dedicated to this, which is honestly deplorable.